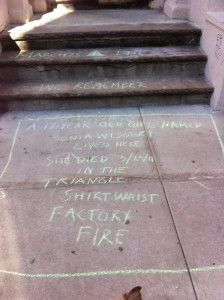 "She Died 3/25/11 In The Triangle Shirtwaist Factory Fire"

This sign was part of the CHALK project, an annual remembrance of the fire. This year marks the 10th year of CHALK. There are several sites that showcase CHALK, including this one that highlights the centennial in 2011. That year there was a procession down to City Hall, attended by most of the city's unions, including 802, the Musicians Local.

The fire was a totally preventable tragedy; the women were made to work overtime that day, and the doors were bolted to prevent any of them leaving the factory. As a result, many jumped out windows to their deaths on the cobbles below.

This tragedy resulted in many preventable deaths, and consequently legislation was passed to ensure that this would never happen again.
Collapse